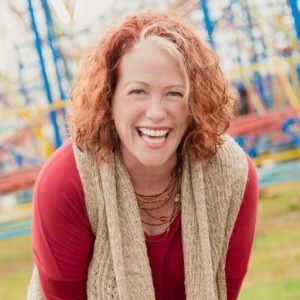 In this week’s Behind the Pen series I interviewed Kristen Daukas. Kristen is a local writer but has also written for many national sites as well and runs her blog, previously known as Four Hens.

What do you love about writing?

I love being able to put my thoughts into words that (hopefully) move people or, at the very least, make them stop and think. In a world of 140 characters, having an outlet to really dig deep into a topic and give your opinion is becoming a lost art form.

How did you get into the writing world?

Funny story… we were living outside of Philadelphia and after giving birth to my third daughter, I realized that I didn’t have time to run up to Walgreen’s and send pictures of the kids all over the United States. At the suggestion of my best friend, I launched the Four Hens site on Typepad and other than a few times of radio silence, it’s been an active site. Since then, I have launched a couple of other sites (Four Hens is getting ready to be relaunched under a new name) and written for national sites such as Huffington Post, SheKnows, What the Flicka, and contributed to a book.

What top 2 challenges do you find in writing?

Where do you find inspiration for your article/blog ideas?

A lot of it is just from life experiences. The things that I see happening around me and in the world. I also listen to what parents are talking about as it relates to their kids – especially their frustrations with social media and technology. Since I teach adults how to “adult” the digital generation, those conversations are the most important source of inspiration to me.

The most challenging piece that I wrote was my contribution in the book The Mother of All Meltdowns. It was about a moment between my oldest daughter and I that turned into a level 5 volcanic eruption and once we chipped thru the chaos, we discovered that her actions were because of some things that were going on between her and a boy she had been dating.  It was very raw and it scared the crap out of me to put it into the universe.

My favorite piece is one that is the closest thing to going ‘viral’ that I’ve ever written and it was called 7 Simple Rules for Living in My House. Oooo boy did that one get a lot of attention – and not all of it good. That’s also the post where I learned to live my writing mantra “don’t feed the trolls”.

Do your research. Look up other articles that have been written about the person and come up with something that hasn’t been asked before. I love old-school reporters who ask the hard questions and not the ones that are low-hanging fruit. Be that writer – not the fluff writer.

If you could give an upcoming writer, one piece of advice what would it be?

Don’t be afraid to write from the heart and say what you want to say. Like I said earlier, the world has enough fluff. What we need is more real writing. Don’t be afraid to try a few different things until you find what works for you. Writing is like anything else – it has to be fun and mean something to you in order for you to keep it up. Also, don’t get in the “everything has been written” cycle. Yes – most topics HAVE been covered but they haven’t been covered in your voice.

Where can people go to see more of your work?

Final thoughts from Kristen on writing…

I love writing and like many who do it as a passion hobby, wish I had more time to do it. I’m always blown away when someone reaches out to me and tells me that something I’ve written moved them or inspired them. It doesn’t happen very often but when it does, it makes all the work worth it.

Processing…
Success! You're on the list.
Whoops! There was an error and we couldn't process your subscription. Please reload the page and try again.

In love with our new couch! 🛋 Thanks to @allindafielders for the early Christmas present! ❤
Another fun pool and beach day! 🌊😍 Sad to go home tomorrow!
Love that sound and sunset view!! 🌊🌅😍
@splashbythesea was so good last night we decided to go back for dinner tonight! 🍣🐟🍷
What a fun day!! Pool, beach, amazing dinner, and seeing a beautiful sunset! 🌊🌅
Enjoying a delicious dinner with an ocean view at @splashbythesea where we had our rehearsal dinner last year!!! 🌊🦐🍸
Fun first day at the beach! 🌊 Sarah drove us most of the way! 🚗 We got settled in and enjoyed some tacos for dinner. 🌮 Can't wait to hang out at the beach tomorrow! 💕
My happy place! ❤🌊
I can't believe Sarina is 3 months old today!! 💕